Originally created for GoPlay NW, this collection of TTRPG Safety Tools gives you print-at-home versions of several different tools, allowing you to keep them close at hand and choose the tool the best fits your group's needs.

You're welcome to print and use these cards for your personal table, live stream, or next big event.

Cards are included for the following safety tools.

Probably the most well known ttrpg safety tool out there, John Stavropoulos's X-Card is familiar and easy to include even on a table crowded with lots of other things. While the use of the card itself has lots of different meanings, it is mostly used to indicate that something has made someone at the table uncomfortable and that they would like to remove that content from the game. You can read more about the X-Card here.

The Stoplight takes a various possible uses of the X-Card and breaks them into three different symbols to help facilitate more explicit communication about your needs at the table: The Check-In provides an easy nonverbal way to make sure everyone is comfortable, Caution informs the table they are approaching a sensitive topic and should discuss that, and Stop provides an emergency break when a boundary has been crossed and a serious conversation or break is needed. The Stoplight was originally created by the Babble On Equity Project and Meg Baker..

Two variations of the Stoplight are included in this collection:

Originally part of the world-building set-up phase for Ben Robbins' epic history exploration game, Microscope. The Palette expands the conversation around safety by framing the conversation around what folks WANT and DON'T WANT to see in the game. This allows players to focus on the tone and content they are excited about seeing, while turning the "No" list into a conversation about more than just a player's personal boundaries; you don't need to distinguish between whether or not you added something to the "No" list because it's a personal trigger or because it's just a theme you don't want to explore for that specific game.

Two versions of the Palette are included:

Pause/Retcon/Fade-to-Black were originally created by Star West for use in  Wanderlust. These tools facilitate safety while framing the conversation around collaborative editing of the fiction. They encourage regular use at the table, helping to normalize an ongoing conversation about the fiction, rather than treating their use like something that's only there for emergencies.

Two variations of Pause/Retcon/Fade-to-Black are included in this collection:

Why did you choose these safety tools?

There are a lot of different safety tools out there, and we encourage you to use the tools that work best for your table's needs. We chose these tools because we personally prefer them, and because many of the other tools out are already available in a printable format.

The X-Card is probably the most recognizable safety tool out there, and while it is not our preferred tool, it's one that nearly everyone sitting down at GoPlay NW (the event we created these cards for) is already familiar with.

When given the choice, we prefer the more nuanced approach of the Stoplight over the X-Card. While John describes multiple uses for it, most people treat the X-Card as being explicitly for removing something from the game; the Stoplight give folks more explicit ways to express their needs with less ambiguity.

Similarly, Pause/Retcon/Fade-to-Black provide an ongoing to way facilitate conversation around the fiction in an open, friendly, and approachable way. You can Pause or Retcon the game for any reason in order to create more exciting and interesting fiction, not just because of uncomfortable content. These tools encourage their ongoing use throughout play rather than being treated like something that should only be used in emergencies (I personally have seen folks more readily use Pause/Retcon/Fade-to-Black than any other safety tool at my table.) They also cover most of the same ground as Beau's Script Change while using fewer pieces.

Can you add a [Name of Safety Tool]?

Sure! If there's a specific tool you'd like to see added, let me know in the comments. I can't promise or guarantee when I'll get to it, but I can try. In cases where there's a specific known creator, I might ask that you have them contact me directly.

Why use cards? Shouldn't folks just speak up if they have a problem?

How can I learn more about safety tools?

The TTRPG Safety Toolkit by Kienna Shaw and Lauren Bryant-Monk provides an excellent discussion about the value of safety tools and provides a primer on several of the most well known tools available; it also includes its own set of printable cards for several of the tools it describes. There is also @rpgnatalie's excellent article "Safety Tools Compilation."

You can learn more about specific tools through the websites of the creators for those specific tools, such as John's X-Card and Beau's Script Change. And several articles have been written about other tools, such as the Support Flower, Thorns and Roses, the O-Card, and many others.

Some of the best safety tools out there are designed directly into the game's mechanics, so keep an eye out for the way designers incorporate rules that facilitate consent and ownership of the fiction in their games.

These are perfect! Thank you so much!

Thank you! I'm glad you liked them. 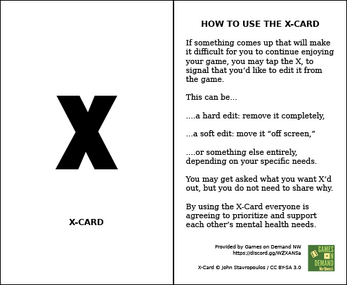 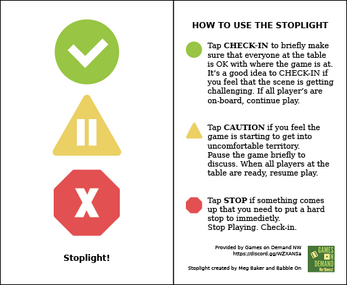 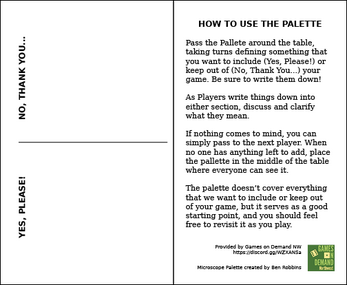 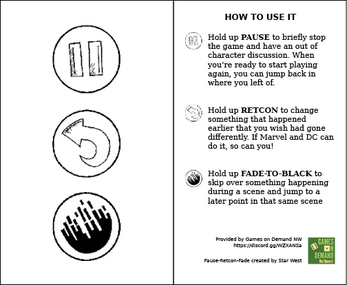